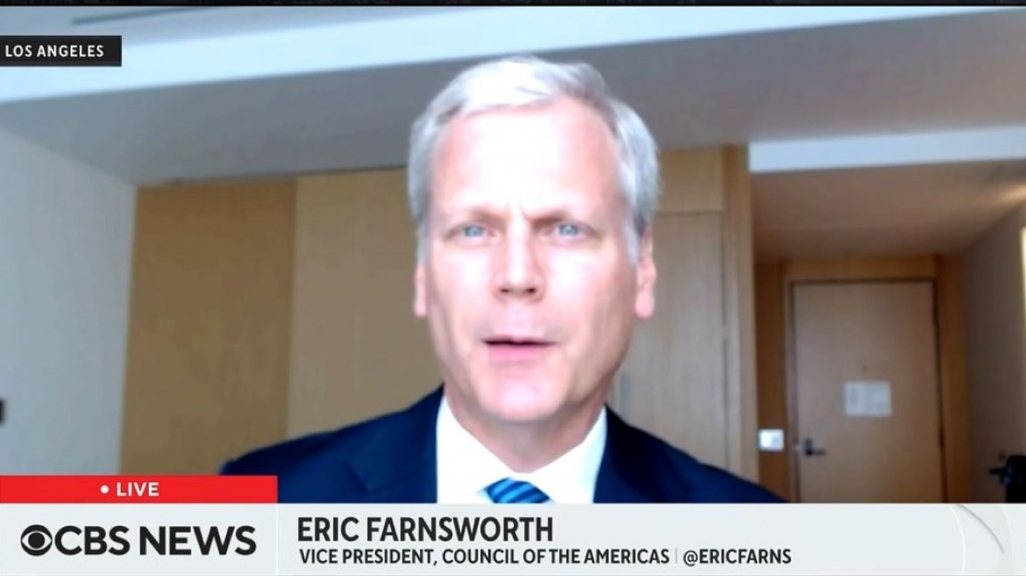 Eric Farnsworth on CBS: Topics at the Summit of the Americas

"We have to make sure that we, the United States, are really helping to offer what the other countries are looking for," said the AS/COA vice president.

AS/COA Vice President Eric Farnsworth spoke to CBS News' Lana Zak about the Ninth Summit of the Americas in Los Angeles. Farnsworth said that things have changed "significantly" since the first summit hosted by the United States in 1994. "You have to remember where we were in terms of coming out of the Cold War, in terms of Latin America really turning the page toward democracy, and in terms of the United States really looking to organize the Western Hemisphere on a strategic basis," said Farnsworth. "There are now alternatives for the region, China among them. The United States isn't the only game in town. We're not the only superpower vying for the hearts and minds of the Western Hemisphere."

Farnsworth explained that the United States has been "distracted over the last couple decades in terms of the war on terror. But also more recently we've been distracted by the war on Ukraine, by the Covid pandemic, by economic recovery."

"[Latin America] is feeling a little more independent than it used to and looking for all sorts of ways to establish that independence," said Farnsworth.

Farnsworth listed migration, a recognition that democracy matters, pandemic preparedness, and humanitarian relief as some of the top issues at the Summit of the Americas, adding that, "We have to make sure that we, the United States, are really helping to offer what the other countries are looking for as well, so it's a true partnership."