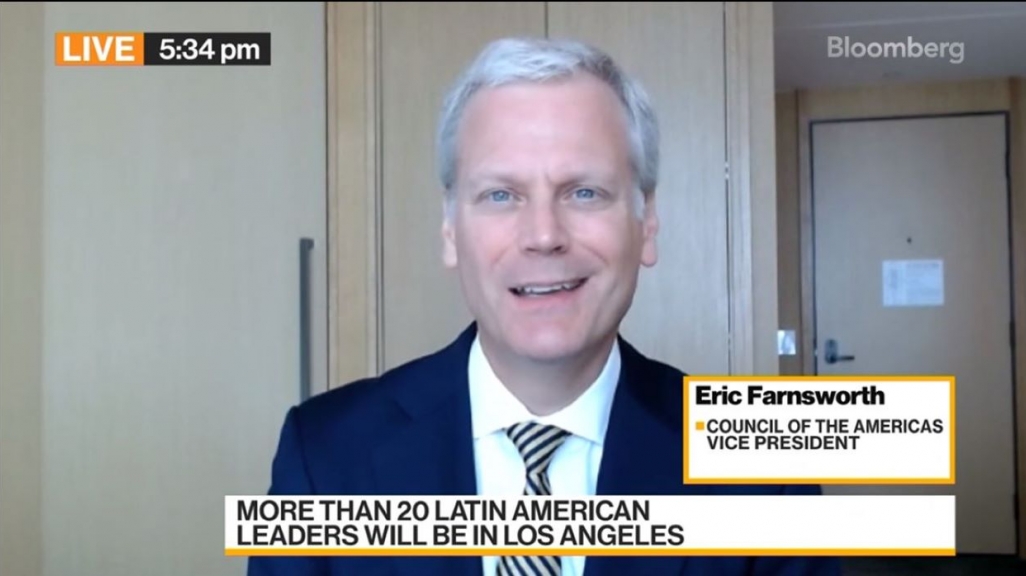 Eric Farnsworth on Bloomberg: The Summit of the Americas

"I'd like a lot more attention to be paid to the region, and this Summit will hopefully bring some of that attention," said the AS/COA vice president.

AS/COA Vice President Eric Farnsworth spoke to Bloomberg's Shery Ahn and Haidi Stroud-Watts on Daybreak Asia about the Summit of the Americas. "The trajectory has been somewhat downward since the first summit was hosted in Miami by the United States in 1994," said Farnsworth. "In 1994, we were coming out of the Cold War. Democracy was coming to Latin America and was being entrenched."

Farnsworth listed migration accords and cooperation on global climate change issues as items to be discussed at the summit. "It's a totally different agenda, and it doesn't appeal to some leaders" he added.

Farnsworth said that "it's really unfortunate" that Mexico's President Andrés Manuel López Obrador will not be attending the Summit. "A couple of weeks ago, he made clear that if the United States didn't invite the dictatorships of Cuba, Venezuela, and Nicaragua, he—the president of Mexico—would also not then come to Los Angeles. It's curious why he would want to align with the brutal dictatorships in the hemisphere rather than coming to Los Angeles to meet with other leaders."

On China's influence in the region, Farnsworth said, "People are aware of it and aware that if the United States isn't able to come up with some real, compelling initiatives, that there's always China out there as a potential partner."

Farnsworth explained that most South American countries now count China as their top trade partner. "A lot of U.S. companies just don't look at Latin America in the same way that they look at Asia," said Farnsworth. "I'd like a lot more attention to be paid to the region, and this Summit will hopefully bring some of that attention to the region."