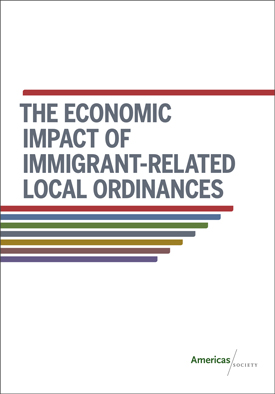 This Americas Society white paper provides the first comparative look at the average economic effects of how restrictive versus non-restrictive immigration-related city ordinances affect a city’s business environment. In a context of high unemployment and lackluster business growth, along with rising anxieties regarding immigration in the United States, we believe it essential to provide a better understanding of how policies that seek to restrict immigration and those that support more flexible approaches affect the economies of communities across the country.

The paper looks at 53 cities that officially implemented either restrictive (housing, employment, 287(g), or English-only) or non-restrictive (sanctuary city) ordinances between 2006 and 2008 and that were still being enforced through 2009. Isolating for a number of outside variables, we then compare how the business environment (measured as number of businesses and number of employees) was in those cities at passage and in 2009. State policies—especially those receiving recent national attention—are not considered due to the period of the study. Further, while one type of ordinance was not observed to affect business closure more than the other, the decline in the number of employees in restrictive cities could lead to the long-term reduction in business productivity and the decline in worker consumption in the local economy; thus, increasing the likelihood of business closure.

Jason Marczak, AS/COA director of policy, leads the Hispanic Integration and Immigration Initiative. Jerónimo Cortina, assistant professor of political science at the University of Houston, is the senior researcher for this white paper and prepared the original draft of the research with research associate George Hawley; they were assisted by research assistants Aaron Diamond and Chris Nicholson. Richard André, AS/COA policy associate, helps to oversee Americas Society’s immigration work, and Alexandra Délano, assistant professor at The New School University, is the senior adviser for this project. Lina Salazar is the special assistant for this project.

About the Hispanic Integration and Immigration Initiative

Americas Society (AS), leveraging the relationship with its affiliate organization Council of the Americas (COA), promotes dialogue and information sharing among the private sector, public sector and community groups to advance Latino integration in the U.S., with a focus on the immigrant population. The Hispanic Integration and Immigration Initiative supports the further integration of immigrant workers into businesses and local communities while creating a more mobilized and visible business sector with regard to issues of immigrant integration.