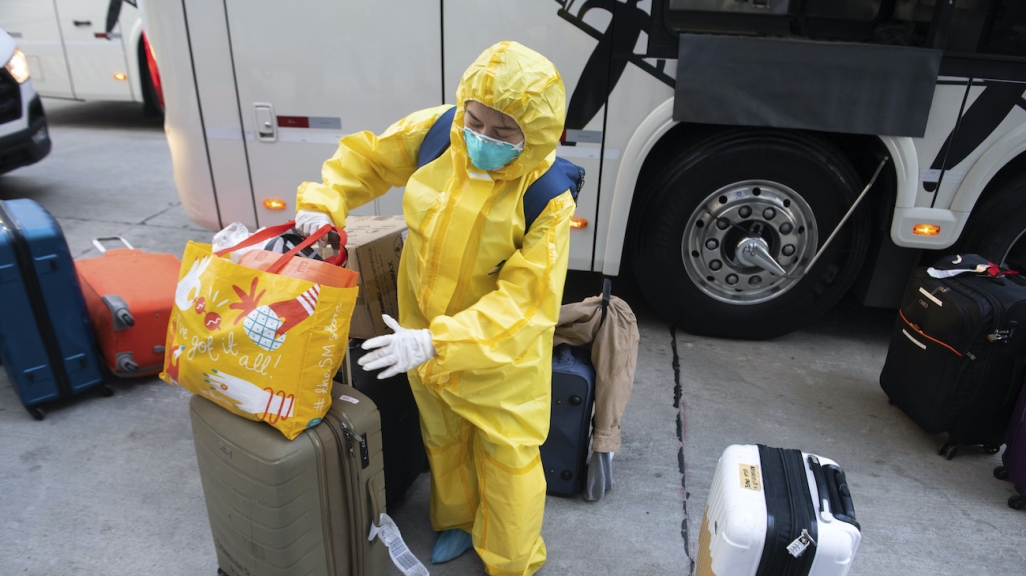 A cruise ship crew member checks into a hotel in Uruguay. (AP)

Mitigation measures The long road to recovery The future of tourism

Covid pulled the rug out from under Latin America’s tourism industry, which was growing at 10 percent annually pre-pandemic.

In March 2020, flights across the world were grounded, borders shut, cruises docked, and people ordered to stay home to prevent the spread of the then-novel coronavirus. By the end of the year, international tourist arrivals were down 78 percent compared to 2019. Closer to home, the International Monetary Fund (IMF) noted a 75 percent decline in overall mobility in the Western Hemisphere.

The collapse of global tourism hit Latin America particularly hard. During the five years prior to COVID-19, the tourism sector grew at a rate of roughly 10 percent across the region. By 2019, the Caribbean derived an annual average of 11 percent of GDP from tourism and Latin America 4 percent. This translates into 42 percent of total exports of goods and services in the Caribbean and 10 percent in Latin America. The World Travel and Tourism Council (WTTC) estimates that the pandemic cost Latin America’s tourism industry $230 billion in losses in 2020.

The pandemic also cost 12.4 million jobs from the tourism industry, which connects to adjacent sectors including agriculture, food and beverage, construction, transportation, and the creative arts. In 2018, around 9 percent of employment in Latin America and the Caribbean was directly or indirectly linked to the industry. Tourism workers are often low-skill, informal, and seasonal—all workers who were disproportionately affected by the pandemic and whose jobs by definition could not be done from home. The industry also features a notable gender disparity: women make up 60 percent of the tourism workforce in Latin America.

Of course, the pandemic’s effect on the tourism industry in the region is not equal. Mexico, which has the largest tourism sector in Latin America, experienced a $129 billion loss from this sector alone and a 69 percent reduction in the tourism workforce. Brazil, another major tourism destination, reported $51 billion in losses and saw 13 percent of the sector workforce, disappear.

Still, some smaller countries in the Caribbean and Central America faced the worst impact. Costa Rica, for example, faced a 48 percent fall in tourism revenues in 2020, which represents a 2.1 percent drop in the country’s GDP.

Countries have worked to overcome these setbacks by advertising their mitigation measures to assure tourists that visiting will be safe and ethical. Governments are employing a variety of entry requirements, including a negative test result, a quarantine period, and/or the possession of health insurance.

To help consumers navigate this new tourism market, there are new certifications to assess the rigor of a country’s mitigation measures. The WTTC, for example, introduced a stamp in May 2020 to denote destinations that observe the organization’s designated protocols. The stamp is now in use across the region. Several countries, such as Costa Rica, have their own hygiene protocol rating system. There are also private sector certifications in development.

The long road to recovery

Now, with the vaccination rollout in process, countries are considering how to reignite tourism. There is hope that a combination of high vaccination rates, a reopening of borders, and the pent-up urges of the quarantined to travel will result in a bounce for tourism.

That recovery might still be a ways away. Across Mexico, hotel occupancy rates were down around 50 percent in January of this year compared to the year prior. In Chile, international tourist arrivals in January 2021 were just 5.4 percent of what they were the year before. Traditionally, tourism’s high season in Latin America runs from January to March, meaning that countries are losing out on critical business under present conditions.

Not all that is lost will come back. According to the World Bank, pandemics in the past have reduced the productivity of the tourism sector by anywhere from six to 15 percent, and experts expect the effects of this pandemic to be worse. In Bolivia, for example, 50 percent of tourism businesses have closed due to the pandemic.

Part of the concern is that tourism industry in Latin America is highly dependent on small businesses, which have fewer resources to combat a long-term pandemic. In Costa Rica, for one, 94 percent of accommodations are categorized as a small or medium enterprise. After months of inactivity, surviving businesses face liquidity problems that could result in closures without government support programs.

Other impediments to a reignited tourism sector are the remaining restrictions on mobility. The land border between the United States and Mexico remains closed to non-essential travel until at least March 21.* In 2018, almost 40 percent of tourists entered Mexico through land crossings. On January 29, Canada suspended flights to Mexico and Caribbean for three months due to resurgent case numbers. And, many countries remain closed to the United Kingdom and South Africa due to a fear of new strains.

One area where this is positive development is domestic tourism. Many citizens are feeling more comfortable travelling within their own country as there are less restrictions on mobility. Traditionally, domestic tourism is significant across Latin America, especially in Mexico, where it accounts for three-quarters of visitors, and in Argentina, Brazil, Chile, and Peru, where it is over 50 percent. In 2019, 83 percent of Mexico’s tourism revenue came from domestic tourism. Restoring the flow of domestic tourists can go a long way in reviving the tourism sector, according to ECLAC.

The future of tourism

As in many sectors, there will be a rebuilding and a reconsideration of what the tourism market looks like in the eventual aftermath of the pandemic. In a February report on the topic, the IMF examined the challenges and opportunities for countries to rebuild their tourism sectors. While they recognized how destructive the pandemic has been for the industry, they also expressed that it presents a chance to restructure the industry around practices that will make it more resilient and environmentally friendly in the future.

Even before the pandemic, tourism was already reckoning with its environmental impact in light of the climate crisis. The IMF predicted that the trend toward ecologically sustainable tourism will accelerate after the pandemic. This is partially because the pandemic has created a preference for socially distanced tourism. This means that low-density locations—like the countryside and less populated cities—will increase in popularity as tourists attempt to avoid crowds. Ecologically conscious tourism also seeks to strengthen the ties with locally produced agriculture, manufacturing, and entertainment sectors.

In addition, Ecotourism meets an increasing demand for high-value added tourism. Many ecotourists are higher income, which means they are more likely to travel and may be from countries with greater vaccine access. Another facet of high-value tourism that may accelerate due to the pandemic is digitization. Internet and social media platforms are increasingly critical tools for tourism vendors to communicate with attract and visitors, especially in a pandemic.

The IMF also projects that the role of healthcare in tourism will increase. Tourists are now more likely consider the quality of a country’s healthcare system when deciding whether to travel. Already, the demand for coronavirus tests is testing the capability of local healthcare systems. Many destinations have now built clinics to perform testing, and some hotels and airports in the region are offering on-site testing as well.

Still, the IMF predicts that the decline in tourism as prompted by the pandemic may cause some countries to shift their focus and resources toward other industries and exports, such as non-tourism service sector activities, manufacturing, and natural resource development. A UN World Tourism Organization survey of industry experts found that 50 percent of respondents believed that tourism would begin to rebound in 2021 while the other 50 percent expressed that it would not be until 2022.

*Editor's note: An earlier version of this article stated that the U.S.-Mexico border was closed. It is closed to non-essential travel.