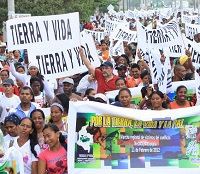 More than 20,000 people marched in Colombia’s northern region of Necocli on February 11 as a part of a series of government-organized demonstrations to rally support for a new piece of legislation, Colombia’s Victims and Land Restitution Law. Also known as Ley 1448, the law went into effect on January 1, guaranteeing financial compensation and restitution of land for victims of the country’s prolonged armed conflict. Passed in June 2011, the law seeks to provide aid to both victims and relatives of victims of guerrilla, paramilitary, and state violence starting in 1985. On February 8, a constitutional court ruled recipients of compensation would include both immediate and extended family members of victims, such as grandchildren, nephews, and cousins. The law even accounts for future victims through 2021. In total, the law aims to compensate up to four million victims and restitute 14.8 million acres of land over the next 10 years. Over the past two decades, Colombia’s armed conflict displaced roughly 3.7 million people, who lost a total of 16 million acres of land, according to Human Rights Watch. This month, President Juan Manuel Santos called for the mass demonstrations, which will be held in some of the most vulnerable parts of the country as a way to begin the official restitution process. The approach is part of the government’s plan to impose control in contested areas where internally displaced persons will resettle on their land.

One of the most controversial elements of the legislation is the cost. A similar bill failed to pass in 2009, after former President Álvaro Uribe said the initiative was too expensive. As it stands now, tribunals will determine recipients of land restitution, and victims who apply for financial compensation will have the right to receive between $4,760 and nearly $11,000. The Economist estimated the law would cost between $550 and $880 million each year over the next decade; other estimates put the cost at $26 billion through 2021. But in 2012, the government earmarked just $3.4 million to finance the law. Another hurdle for resettling victims in areas where armed groups still hold sway and violence could erupt. Some guerrilla groups now gain funding from legal businesses like cattle raising rather than drug trafficking, allowing them to become further entrenched in contested areas. Edward Fox of Insight Crime commented: “It is likely that in these areas [Santos] will face his biggest challenges both politically and logistically, especially in former paramilitary-controlled areas that have large, legitimate business interests.”

Nevertheless, there’s evidence that the initiative is viable. The restitution process actually began in 2009, when the Ministry of Agriculture began a program to award compensation and return lands to victims. Since 2009, the government returned close to 1.97 million acres to displaced persons.  Through August 2011, the government awarded $364 million to over 35,000 families. Institutionalizing the compensation process is a cornerstone of Santos’ administration; by passing the bill, Santos managed to successfully implement a program that had been debated for years. In September 2011, Santos spoke about the legislation at Americas Society/Council of the Americas. “This law will allow us to start healing those wounds…by giving the persons that were displaced by the violence the opportunity to go back to their land and become dignified and productive citizens again. I think this will allow Colombia…to look to the future with more optimism and not going after each other, claiming justice.”

A Supreme Court decision sounds encouraging on the surface – but will likely fail to protect indigenous peoples in practice.