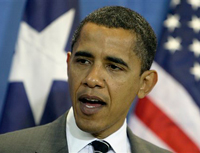 Updated June 14, 2011 - When Obama landed in Puerto Rico on June 14, it marked the first official visit from a U.S. president since John F. Kennedy stopped by in December 1961 on his way to Venezuela and Colombia. (President Gerald Ford visited Puerto Rico in 1976, but he was not on official business.) Obama had plenty of business to take care of on an island with a tanking economy and a contentious political status, but the timing suggested his trip may have also been aimed at bolstering Hispanic support in the United States.

Obama's visit lasted about four-and-a-half hours and coincided with an inter-agency meeting to advance the Task Force on Puerto Rico’s Status. President Bill Clinton created the Task Force back in 2000 to evaluate proposals to change Puerto Rico’s current status as a commonwealth, which the island formally adopted with its constitution in 1952. The Task Force issued a report in March recommending a two-part plebiscite open only to Puerto Rican residents to choose between the four options: remaining a commonwealth, becoming a state, declaring independence, or becoming a freely associated independent state. Independence supporters plan to protest the visit. In a look at Obama's visit, The New York Times reports that roughly half of Puerto Ricans support statehood and a large portion support the status quo while a minority advocate independence.

Obama discussed economics as well. He expanded the Task Force’s scope in October 2009 by executive decree to improve the federal government’s relationship with the island. The Task Force’s 2011 report includes a slew of recommendations to promote economic development, build competitive industries, and expand access to education and healthcare. Some recommendations include providing grants to expand civil service training, extending child tax credits to households with one or two children, and widening access to Medicare. "We are going to put people back to work here in Puerto Rico and all across America," Obama said in a speech during the visit.

Puerto Rico could use the help. Its economy has been sagging since 2006—two years before the U.S. economy began to slump. The island’s GDP shrank by 5.8 percent last year to $64.8 billion, while GDP per capita tumbled from $18,100 to $16,300. The unemployment rate stood at 16.4 percent in April, according to the U.S. Bureau of Labor Statistics.

Obama may have had other reasons for timing the trip this month. The Latino vote proved key for Obama during his 2008 campaign, but he has moved slowly to address immigration reform—one of the constituency’s highest priorities. Shortly after formally announcing his reelection bid in April, Obama began aggressively reaching out to the Hispanic leadership. He held well publicized meetings within weeks with high-profile stakeholders including media mogul and New York City Mayor Michael Bloomberg, actress Eva Longoria, and journalist José Díaz-Balart. He renewed his call for the DREAM Act during a commencement speech at Miami Dade Community College on April 29 and he called for comprehensive immigration reform at El Paso on May 10.

Puerto Ricans cannot vote in presidential elections—though they can vote in primaries—but Obama’s visit promises to inspire goodwill among the 4.6 million Puerto Ricans that live on the U.S. mainland rather than the island’s 3.7 million who live on the island, according to Andrés López, a member of the island’s Democratic National Committee. López pointed out in an interview with the Associated Press that some 725,000 people of Puerto Rican descent live in the political battleground of South Florida. "The Puerto Rican vote is really the swing vote of the Hispanic vote right now," Susan MacManus, a government professor at the University of South Florida, told USA Today. "The symbolism of going to Puerto Rico will not be lost on that vital community."

Will Puerto Rico’s Business Community Step Up to Solve the Island’s Political Crisis?

The private sector can help fulfill the island’s calls for change.