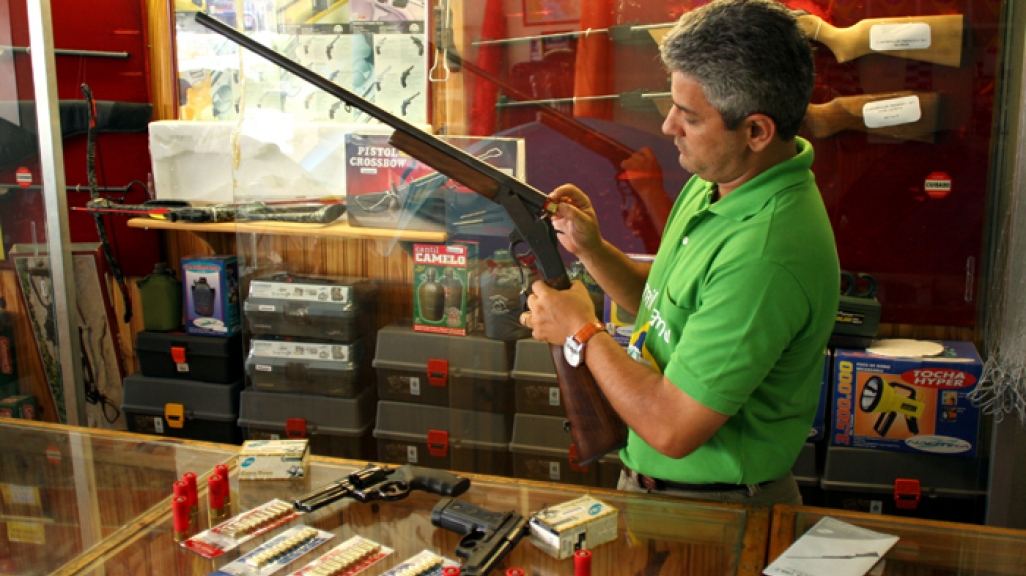 Elected last year, the “bullets, beef, and bible” caucus is pushing for legislation to weaken gun control and crack down on speech considered offensive.

Last year, Brazilians elected the most right-leaning Congress since redemocratization, including the so-called “bullets, beef, and bible” caucus representing security, agribusiness, and religious interests. Now, the Chamber of Deputies is considering a variety of measures that would ease gun control and potentially restrict free speech.

Brazil’s Chamber of Deputies is considering bills that would alter the country’s Disarmament Statute, passed in 2003. The law established rules for gun purchases, with 25 as the minimum age. It prohibits civilians from carrying guns, requiring gun owners to prove why they need them outside their homes. The legislation also established a national gun registry; gun owners must renew their permits every three years. In the six years following the landmark legislation’s implementation, annual weapons sales fell 35 percent.

But last year, the weapons industry donated about half a million dollars to electoral campaigns, including to 22 congressional candidates.

On August 26, a lower house commission approved a bill that would allow traffic enforcement agents to carry guns. The governing Workers’ Party and the Socialism and Liberty Party—both of which oppose the bill—plan to force a floor vote before the legislation heads to the Senate. The bill’s supporters argue that these agents are the only security workers who aren’t allowed to carry weapons, risking their personal safety.

Next, the lower house will consider a bill that could defang the Disarmament Statute. The text of the proposal is set to be unveiled this month, though O Globo reported the bill’s main points. The legislation would require gun license renewals every 10 years instead of three, and even proposes making gun possession permanent, without having to renew a license. It would reduce federal administrative taxes to legalize weapons by 70 percent and would make it easier for foreign arms companies to set up operations in Brazil. Finally, it would allow civil police to register firearms; at present, only federal police can do this.

Another bill set for unveiling this month would punish those who write offensive or defamatory statements online about politicians. It would speed up the process of identifying these Internet users and would make sites and Internet providers criminally responsible for hosting such content. The legislation would also target users who create fake accounts with the purpose of making fun of politicians.

Brazil’s Internet Constitution, which passed last year, established protections for Internet users and providers, ensuring data privacy for users and shielding hosts and providers from liability for user content. The bill would alter this landmark law, making it easier to force sites to remove content that offends elected officials. In the last four years, lawsuits brought by lower house congressmen against the media and companies like Google and Facebook increased 30 percent.

Congressman Cláudio Cajado, the new bill’s author, told watchdog group Congresso em Foco that there’s no system to go after people who create fake accounts. “Our idea is that those who commit a crime must be held responsible,” he said. “No one here wants to restrict freedom of expression…what one can’t do is hide behind anonymity to commit crimes.”

Similarly, in June a bill was introduced to the Chamber that would require Internet providers and websites to collect personal data of anyone who comments on articles, online fora, and social media in order to prosecute those who defame others or use hate speech. The stated goal is to combat anonymous postings with offensive content.

“Our legislation should stay the way it is, without criminalizing any cultural or religious protests, even if in the eyes of a third party it may be perceived as intolerance,” Marcelo Figueiredo, president of the Brazilian Bar Association’s Constitutional Law Commission, told online news site iG.