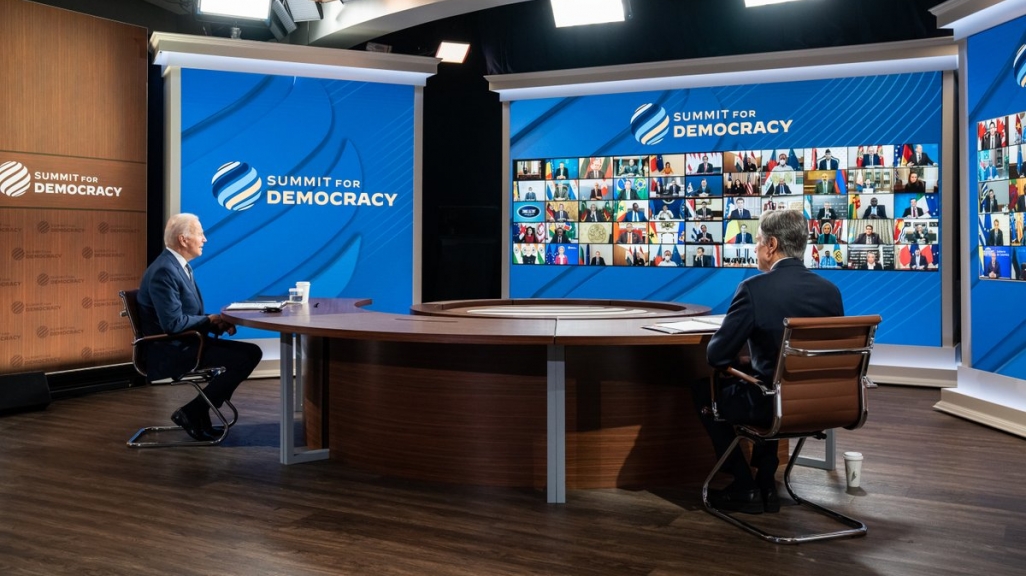 From December 8 to 10, the Biden Administration is playing host to the Summit for Democracy. The event, which was part of then-candidate Joe Biden’s campaign platform and officially announced in February during the early days of his term, centers around three themes: defending against authoritarianism, addressing and fighting corruption, and promoting respect for human rights. Over three days, there will be a series of speeches, panels, and townhalls on topics like women’s political rights, online misinformation, media freedom, and youth participation. Both world leaders and civil society groups will be participating.

The Biden Administration’s stated goal was to invite “a regionally diverse set of well-established and younger democracies,” though it did not publish its guidelines for how it arrived at the 112 countries that will be present. However, some experts are voicing concerns that some invited countries, such as Brazil, have witnessed democratic backsliding. Others worry about the message it sends to extend invitations to countries like Argentina and Mexico that recognize dictatorships in Cuba and Venezuela. Still others questioned Washington’s authority to make such distinctions after the International Institute for Democracy and Electoral Assistance noted a “concerning decline” in the state of democracy in the United States for the first time ever in its 2021 report.

Several leaders from Latin America—where support for democracy has declined to below 50 percent over the past decade per Latinobarómetro—will speak at the event, including the President of the Dominican Republic Luis Abinader, Peru’s former Prime Minister Violeta Bermúdez, the President of Costa Rica’s Legislative Assembly Silvia Hernández Sánchez, and Ecuadoran Attorney General Diana Salazar. The Biden administration also affirmed its support of Venezuelan opposition leader Juan Guaidó by inviting the embattled leader to address the summit.

Seven countries in Latin America were left off the invite list: Bolivia, Cuba, El Salvador, Guatemala, Honduras, Nicaragua, and the Maduro regime in Venezuela. Some of those countries—like Cuba, Nicaragua, and Venezuela—are hardly surprises, as the United States has spoken out against authoritarianism in each country. In the case of El Salvador, Guatemala, and Honduras, the decision not to invite leaders has drawn attention, given the Biden Administration’s focus on stemming migration from Central America. In the case of Guatemala, U.S. Vice President Kamala Harris traveled there in June, where she spoke about tackling the causes of migration like poverty, climate change, insecurity, and corruption. That same month, Biden designated corruption as a core national security interest. In September, the United States sanctioned officials from both El Salvador and Guatemala for their actions to undermine anti-corruption efforts.

Shortly before the summit, the Biden administration released the United States’ first-ever comprehensive anti-corruption policy. The new measures create anti-corruption offices at top U.S. agencies and close loopholes in the U.S. financial system for money laundering, including within the real estate market. The policy also seeks to redress many of the systems that enabled the corruption revealed the Pandora and Panama Papers. Biden is expected to ask summit attendees to join the United States in its sanctions regime against corrupt and authoritarian figures in countries like Nicaragua and Venezuela. On December 8, the United States also announced new sanctions on figures in El Salvador.

Both China and Russia have repudiated Biden’s efforts around the Summit for Democracy. Neither country was invited to the summit, though the White House did extend an invitation to Taiwan. In a jointly penned editorial, the ambassadors to the United States for both countries described the summit as a “product of its Cold-War mentality [that] will stoke up ideological confrontation and a rift in the world, creating new ‘dividing lines.’” In fact, on December 4 and 5, China hosted its own democracy forum, which was attended by figures from over 120 countries, however, no sitting heads of state attended Beijing’s summit.