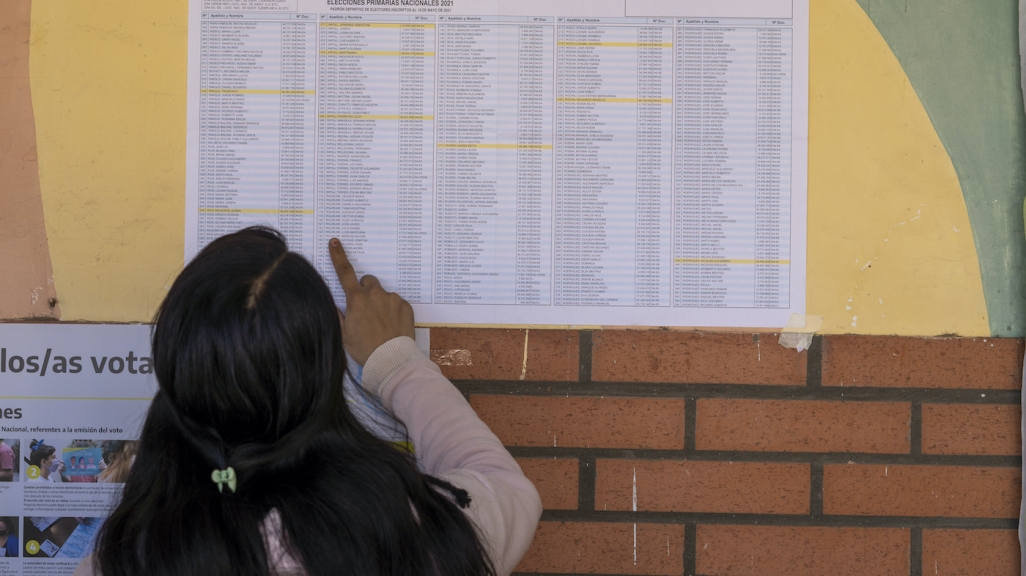 A voter in Argentina looks up her polling station. (AP)

If Argentina’s legislative primaries gave an indication of what’s to come in November 14 midterms, the governing coalition faces challenges ahead. The center-right Together for Change (Juntos por el Cambio) coalition snagged roughly 40 percent of the vote in the September 12 PASO process. Meanwhile, the governing coalition earned just 31 percent support and witnessed a surprise loss in Buenos Aires province. In the wake of the vote, there has already been turbulence in the president's cabinet.

Juan Cruz Díaz, managing director of Cefeidas Group and special advisor to AS/COA, explains why the Everyone’s Front (Frente de Todos) coalition lost ground and steps it may take to regain it ahead of the legislative elections.

AS/COA Online: What were the factors leading to the vote outcome?

Juan Cruz Díaz: The government’s poor electoral performance comes in a context in which it was unable to meet its 2019 campaign promises to restore purchasing power and stabilize the economy, which contracted 9.9 percent in 2020 amid the COVID-19 pandemic. Inflation has continued unabated, the peso has remained unstable, and large sectors of the electorate have not seen tangible evidence of economic recovery that the government has been heralding.

The government also struggled to respond to a series of scandals in the leadup to the election. In early August, photos surfaced of the First Lady’s birthday celebration at the presidential residence in July 2020—a point when indoor social gatherings were banned as part of the government’s social distancing guidelines. The photos caused a negative reaction across the political spectrum. The government’s handling of the vaccination program had already come under scrutiny in February with a scandal that led to the resignation of Health Minister Ginés González García.

As a whole, the electoral campaign was conducted amid notably high levels of voter apathy in which candidates struggled to communicate effectively. The discourse was frequently diverted by more frivolous issues, meaning the government was never fully able to set its agenda. In fact, the president’s approval rating fell to around 30 percent in the weeks leading up to the election, having hovered at around 40 percent for much of the year.

AS/COA Online: Turnout in these PASO was lower than in previous years. If turnout remains low in the generals, who benefits more from that?

Díaz: Although turnout was relatively low (67 percent compared to 72 percent in the 2017 legislative midterms), some observers expected an even lower turnout due to the pandemic and an exception to obligatory voting for the over-70 age group. Nevertheless, the low turnout can be largely attributed to voter apathy and disenchantment with the government, particularly among sectors of the electorate that would normally support the governing Frente de Todos coalition. Indeed, the government is likely to focus efforts to improve their electoral showing among those those who stayed away from the polls on Sunday. That means a repeat of the low turnout in November would likely benefit the opposition.

AS/COA Online: What will you be keeping an eye on in the coming weeks, ahead of the November 14 general elections?

Díaz: The president has been under pressure to make cabinet changes since Sunday’s election. Nevertheless, Fernández has resisted calls for a reshuffle, instead appearing alongside ministers presumed to be under pressure such as Minister of Production Matías Kulfas, Cabinet Chief Santiago Cafiero, and Minister of Economy Martín Guzmán at events to announce economic development programs in recent days. On Wednesday, Fernández came under renewed pressure as several cabinet members aligned with Vice President and former President Cristina Fernández de Kirchner proffered their resignations. As of September 15, the resignations had yet to be accepted, but they can be interpreted as an effort by a part of the governing coalition to pressure the president to make changes.

Looking to the future, Frente de Todos will focus efforts and messaging on convincing voters that the economic situation is improving. To that end, the government is likely to announce several economic policies and programs ahead of the general elections. For example, on September 13 President Alberto Fernández announced the Compre Argentino program, a plan to incentivize the acquisition of local goods and services by national industry. The government is also analyzing increases in the minimum wage and public spending on social programs, along with other direct economic relief measures.

In the immediate aftermath of the elections, the president spoke of the need for the government to continue on its set course, but it remains to be seen if the government will change tack to appeal to a broader swathe of the electorate to attract disenchanted voters. While Fernández toured northern provinces during campaigning, the governing coalition did appear to put national issues and the race in Buenos Aires Province at the center of its campaign to the detriment of other areas of the country. Sunday’s results suggest the government would have been better served by focusing efforts on more localized campaign strategies. It’s worth noting that, at this early stage, the government is still diagnosing its failings in the elections and is therefore in the process of defining a path forward.

AS/COA Online: If the opposition does win control of Congress in November, what will their top priorities be for the next two years? How would this change Peronists' strategies, both at the executive and legislative levels?

Díaz: If the results repeat in November, the government would lose its majority in the Senate and the Juntos por el Cambio opposition coalition could become the largest bloc in the lower house, albeit without a majority. While the opposition’s position will be strengthened, neither bloc will have majorities in either chamber of the legislature, so any advance in legislation will require compromise. As such, the government would have to negotiate to pass legislation and this would require the support of provincial parties and governments, thereby increasing their influence.

Changes to the executive strategy in the short term are still to be determined as the government continues to come to terms with Sunday’s results. While Juntos por el Cambio has consistently returned to topics such as employment, education, and tax relief for companies in recent weeks, the coalition will not have control of either chamber of the legislature. As such, while the opposition will have more scope to put such issues on the agenda, it will not be able to advance them through the legislature without working with Frente de Todos.

After the elections, we can expect to see some political realignment within the main coalitions. Within the opposition, the results strengthened the position of Buenos Aires City Mayor Horacio Rodríguez Larreta as the main coalition leader ahead of the 2023 presidential elections.

There were no clear winners within the governing coalition. In addition to reducing the president’s political capital, the loss in Buenos Aires Province also affected VP Fernández de Kirchner; Chamber of Deputies President Sergio Massa; and National Deputy Máximo Kirchner, who holds the presidency of the Buenos Aires provincial Peronist Party.