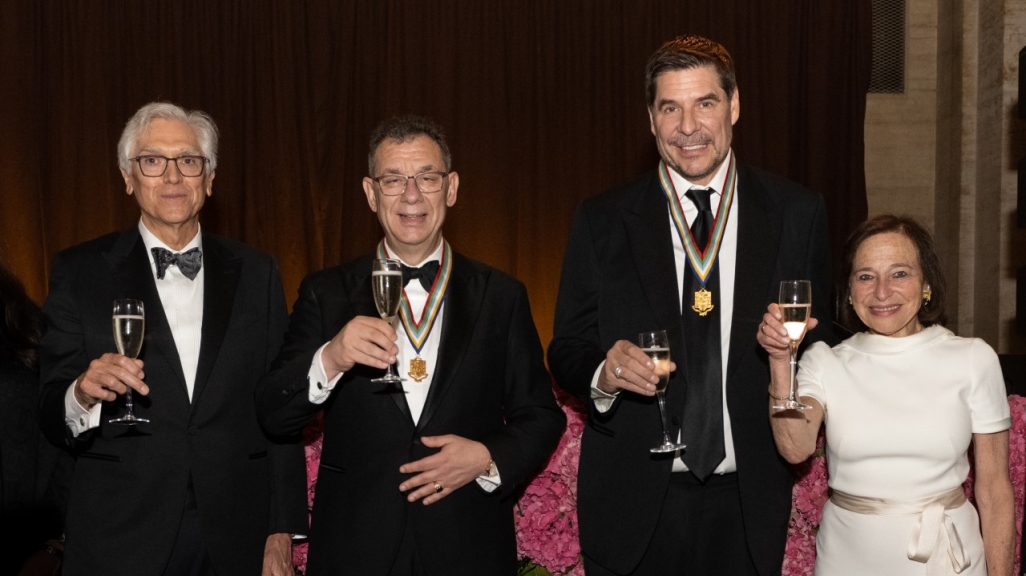 “It is an honor to bestow the Americas Society Gold Medal to two outstanding and inspiring people,” said Americas Society and Council of the Americas (AS/COA) President and CEO Susan Segal. “The Gold Medal, the highest honor we confer, is given to those unique individuals who have made a true impact in the hemisphere. Our honorees this evening certainly embody the spirit of the award.”

AS/COA Chairman Andrés Gluski presented the Gold Medal to Albert Bourla, highlighting his work to transform Pfizer into a more innovative company and foster a culture in which people and science could thrive. “We honor Dr. Bourla this evening for his extraordinary leadership throughout the global pandemic and recognize Pfizer’s critical role in saving the lives of countless people around the world,” said Gluski.

“I am humbled and honored to receive this award alongside a tremendous leader, Marcelo Claure,” said Albert Bourla upon receiving the award. “The role that businesses and their leaders play in society has grown exponentially. We are no longer responsible for just the bottom line, but for making a tangible impact on society. We will continue to prioritize this work at Pfizer by delivering breakthroughs for patients across the world.”

During his more than 25 years at Pfizer, Bourla has built a diverse and successful career, holding senior positions across a range of markets and disciplines, which has informed his understanding of the needs of patients and deepened his commitment to helping ensure equitable access to medicines and vaccines. Bourla, who has served as Pfizer’s CEO since 2019, is a doctor of veterinary medicine and holds a Ph.D. from the Veterinary School of Aristotle University. In 2022, he was named the Genesis Prize Laureate in recognition of his leadership during the pandemic. In 2021, he was named CEO of the Year by CNN Business, included in Insider magazine’s Most Transformative CEOs list, and inducted into the Crain’s New York Business Hall of Fame.

Susan Segal presented the award to Marcelo Claure. “We honor Marcelo this evening for his outstanding leadership, his steadfast commitment to innovation, philanthropy, promotion of technology, and support of entrepreneurs,” said Segal. “He believes deeply that technology can change and improve the lives of people in his home country of Bolivia, in Latin America, and around the world—and his career reflects this conviction.”

“I’ve been trying to solve a problem for nearly 20 years, which is to help solve inequalities and lack of opportunities that exist, especially in Latin America,” said Claure in remarks made after receiving the Gold Medal. “The reality is potential and talent is everywhere, but opportunities are not. And throughout my life, I’ve made it a mission to try to fix this.”

Marcelo Claure founded Brightstar in 1997 and sold it to SoftBank in 2014 when he became the CEO and Executive Chairman of Sprint. Under his leadership, Sprint posted the best financial results in its 120-year history and merged with T-Mobile. In 2018, Marcelo was promoted to CEO of SoftBank Group International, where he was part of the team that launched the $100 billion Vision Fund. In 2019, he launched the $8 billion Latin America Fund, the largest VC fund in the region that transformed the Latin America venture, entrepreneurship, and startup landscape. He also launched the $100 million Opportunity Fund, the first fund of its kind committed to underrepresented African American and Hispanic founders. The 1 Million Project at Sprint, launched by Claure, provided one million internet-connected devices to low-income students across the United States and through the One Laptop Per Child initiative at Brightstar that has provided more than 1 million laptops to children in developing countries across the globe.