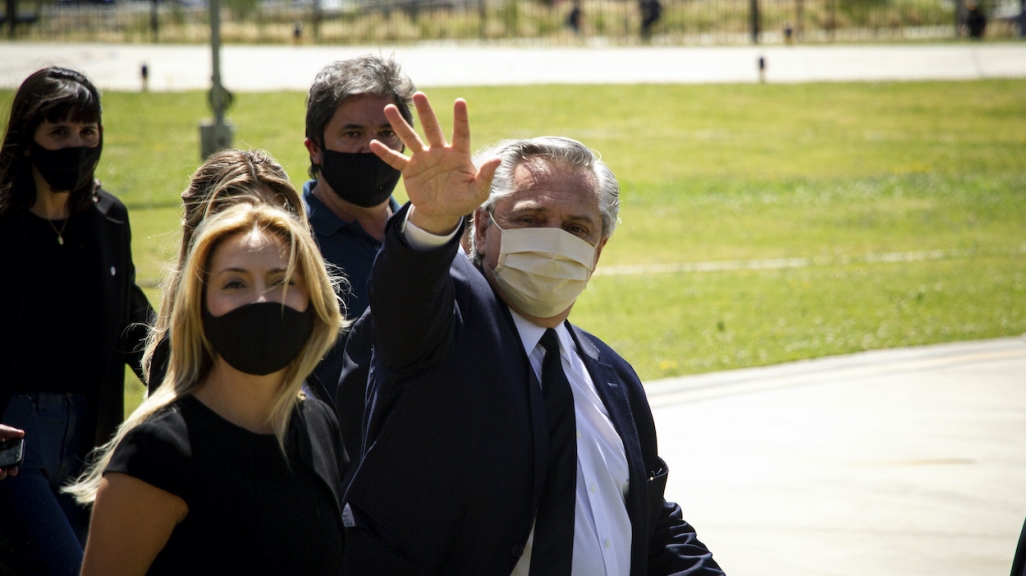 The pandemic An economic crisis A legislative agenda

Argentina’s president faced several challenges in his inaugural year, and the pandemic was just one of them.

Argentina’s Alberto Fernández marks one year as president on December 10, and it’s safe to say it was a year of battles on several fronts. Despite his extensive experience working in the executive branch—he served as chief of staff in the administrations of Néstor Kirchner and Cristina Fernández de Kirchner—Fernández took the job ahead of an unprecedented public health emergency that only deepened economic and social problems.

Just as his presidential honeymoon was coming to an end, Argentina began, on March 20, what would be one of the world’s longest quarantines. Despite that move, the country is among the world’s top 10 when it comes to confirmed COVID-19 cases.

Fernández, who represents the leftist Peronist party, has seen his approval numbers take a tumble; a November Zubán Córdoba y Asociados poll shows that 54 percent of Argentines approve of his administration compared to 82 percent in May. The same poll suggests that 52 percent of Argentines believe the country is headed in the wrong direction, up from 27 percent six months ago.

AS/COA Online takes a look at three areas shaping the president’s first year as he enters the second round of his four-year term.

Argentine President Alberto Fernández's first 100 days concluded at a time of huge uncertainty—not only for Argentina, but the world.

On March 7, Argentina became the first Latin American country to announce a coronavirus-related death, four days after confirming the country’s first case. The president reacted quickly, decreeing, on March 12, a state of national health emergency. Eight days later, with the backing of all 23 local provincial governments, he imposed a mandatory and nationwide quarantine through the end of that month and said “we will be absolutely inflexible.” He went on to extend the measure 16 times. Despite the strict quarantine, Argentina went on to have the second-highest number of confirmed cases in Latin America, and as of December 8, 1.47 million cases and more than 40,000 dead.

Meanwhile, Fernández faced a backlash to his measures. Argentines first took to the streets in May in several cities, including Buenos Aires and Córdoba, calling for a reopening plan for economic reasons. In the first two months of quarantine, over 18,500 businesses shuttered. More anti-government protests took place throughout the year, with protesters carrying placards with messages such as: “There’s no health without work.” In an initial move toward reopening on June 7, Fernández announced a new social distancing phase that eased quarantine restrictions for large portions of the country where contagion levels were low. Social and economic activity began following protocols such as social gatherings limited to 10 people, social distancing rules, and mask mandates. In July, the president announced a gradual reopening of the metropolitan Buenos Aires region, including the capital and its 35 surrounding municipalities. The country is now in a less restrictive social distancing phase with the exception of a handful of urban areas in the south that remain in quarantine through December 20 due to high contagion levels.

The president was also an active player in the region’s race for a COVID-19 vaccine. In August, Fernández announced that an Argentine laboratory signed an agreement with AstraZeneca and Oxford University to produce a vaccine, saying that between 150 and 250 million doses would be available for distribution across Latin America—with the exception of Brazil, which has a separate production and distribution accord—in the first six months of 2021. The Argentine leader also agreed with his Mexican counterpart Andrés Manuel López Obrador that the first stage, involving production of the active substance, will take place in Argentina while final production stages will be in Mexico. In November, Fernández announced he agreed to buy an initial 22 million doses of the British vaccine, and indicated he plans to buy 750,000 doses of the U.S. Pfizer vaccine in December, as well as 10 million doses of Russia’s Sputnik V candidate by January 2021.

At the start of quarantine, Fernández said that the intent of the government’s lockdown was to save lives over pesos. At his inaugural address kicking off Congress’ 2020 ordinary session on March 1, the president vowed to use “all legal tools available” to mitigate price increases, fight hunger, and resolve the country’s public debt, among other issues, but the unforeseen health crisis only deepened the economic woes Fernández aimed to mend. The president inherited an ominous economic reality, including a recession that began in 2018 and unemployment at nearly 10 percent by the time he was running for office in 2019. As the pandemic worsened the economy, the Argentine peso devalued from nearly $60 pesos to the dollar when he took office to about $82 pesos on his anniversary. Meanwhile, the poverty rate rose to almost 41 percent in the first half of 2020 compared to 36 percent, year on year. But the president may close his first year having tamed inflation to a projected 37 percent compared to the nearly 54 percent rate he inherited.

Another big first-year task was to restructure roughly $100 billion in sovereign debt with international creditors, including the International Monetary Fund. In a July AS/COA event, Fernández said that the offer Argentina made to creditors asking for a three-year grace period for repayment and a 62 percent reduction of interest payments was the last offer the government could give, and said: “Please, help Argentina find its way out of this.” In an early August win, the government got the support of three major creditor groups in a deal and, by September, persuaded bondholders to offer new securities to 99 percent of what the nation owed to overseas creditors, providing about $38 billion in debt relief over the next decade. The S&P also lifted Argentina’s credit rating to a CCC+ stable outlook from a status of selective default.

October IMF growth predictions forecast a near 12 percent GDP contraction in 2020 compared to a 2 percent drop in 2019.

From a wide range of reforms put forth in his first year, one proposal took center stage in July—a judicial overhaul. The president pledged to undertake this project during his campaign, and the legislation increased the number of federal courts from 12 to 46 with the goal of distributing power more evenly, to diversify the judges presiding over cases, and end long delays. Senator Anabel Fernández Sagasti, who backed the bill, said, “We need judicial powers with more transparency and social legitimacy.” The 72-member Senate, where Fernández’s coalition holds a majority, approved the bill 40-26 in a late August vote. The legislation now awaits a vote in the lower house, where no coalition holds a majority.

With several members of the ruling coalition facing pending corruption cases, including Vice President Cristina Fernández de Kirchner, the opposition has criticized Fernández’s proposal as an attempt to favor those in government facing criminal charges. The reform names an “advisory panel” of 11 experts—including Fernández de Kirchner’s own lawyer—to study expanding the courts, which critics argue allows for bias if loyalists to those facing charges get appointed. An August Synopsis poll for La Nación showed that over 60 percent of Argentines believe the government looks to control the judiciary for its own benefit, as demonstrated by the tens of thousands who protested the reform in August.

As Americas Quarterly reports, other reforms appeal to a progressive base. Fernández revived a bill in November legalizing abortion for unwanted pregnancies of up to 14 weeks, as well as guaranteeing free access. Today, abortion is only legal in Argentina in cases of rape or if a pregnancy endangers a woman’s health. The president said that, in contrast to the failed attempt in 2018 to make the bill law, this time will be different.

Also in November, Fernández expanded, by decree, access to medical marijuana. In another legislative move in early December, the Senate passed a wealth tax with 42 votes in favor to levy up to 3.5 percent of fortunes of over $2.5 million and use the funds for additional pandemic relief, a measure put forth by ruling coalition legislators in May and backed by the president.