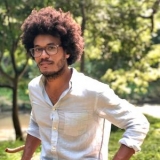 Yasser González Cabrera is as a social impact entrepreneur with seven years of experience in the city bike tourism sector who runs a local bike business in Havana called Citykleta, founded in 2017. To rescue the cycling culture in Havana, Citykleta started to offer free cycling events for locals since 2017 backed up with the profits we get from bike tours. In 2019, their customers increased 198 percent and they hosted 75 cycling events attended by more than 1,200 locals. Also, in 2015, Cabrera started the biggest urban cycling ride in Havana: Masa Crítica Habana and he built an online cycling community over 6,000 members. Currently Cabrera is in the Youth Latin American Initiative ’21 fellowship program. He also cofounded Rutabikes in 2014, and previously worked as web developer between 2009–2013. Cabrera is a 2009 graduate of the Universidad de Ciencias de Informáticas, Havana.