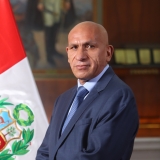 Minister of Economy and Finance

Waldo Mendoza Bellido is Peru’s Minister of Economy and Finance. With a long career and an extensive knowledge of public finance, he has served on the board of Peru’s Central Bank and was the chairman of the board of directors at the Economic and Social Research Consortium (Consorcio de Investigación Económica y Social - CIES). Mendoza has held various positions at the Ministry of Economy and Finance including Vice Minister of Finance and director of Economic and Social Affairs. In academia, he was the chair of the Economics department at the Pontificia Universidad Católica del Perú (PUCP), is a professor at Centrum Católica, and has published 21 books on macroeconomic theory and policies. Mendoza recently served as chair of the finance committee as a member of the Advisory Council to the Judiciary President and has also served on the National Board of Higher Education (Superintendencia Nacional de Educación Superior Universitaria - SUNEDU). He earned a degree in economy from the Universidad Nacional San Cristóbal de Huamanga and received his PhD in economy from the PUCP.