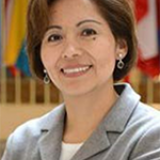 Viviana Caro has been the representative of the Inter-American Development Bank in Peru since mid-May 2015. From 2010 to 2015, she was the Bolivian minister of development planning. Caro has been involved in the Bolivian government for many years. For over 10 years she was part of the Unity of Social and Economic Analysis (UDAPE), an entity in charge of aiding the executive branch. Caro has also been an avid researcher at the Center for Agrarian Development (CEDLA) and worked at the Group of Analysis for Development (GRADE) in Peru from 1990 to 1992. She studied economics at the Catholic University of Lima, Peru and received a master’s in agrarian economy from the University of Wisconsin-Madison.