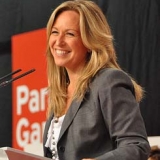 Trinidad Jiménez is the director of public affairs global strategy at Telefónica, SA. Prior to joining Telefónica, she was appointed as Spain's foreign affairs minister in 2010,  health and social affairs minister in 2009, and served as Spain's secretary of state for Latin America in 2006. In 2004, she assumed the role of social secretary of social policy and equality. Jiménez was also a member of parliament, speaker of the committee on foreign affairs, member of the committee on health and social affairs, and member of the committee on the rights of persons with disabilities. In 2003, she was the Socialist Party candidate for the City of Madrid. In 2000, Jiménez was elected secretary of the international policy of the PSOE’s executive board. She obtained her law degree from the Autonomous University of Madrid. During this time, she founded the Socialist Students Organization in the Autonomous University of Madrid, joining as a member of the Spanish Socialist Political Party (PSOE) in 1984.