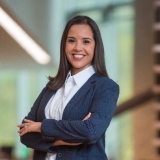 Tania Rojas is the managing director for the CAN LATAM Central Business (Central America, Caribbean, Colombia, and Peru). With more than 20 years of experience in different areas such as finance, strategy, marketing, commercial, and general management. She has worked for Cargill for the last 9 and a half 5 years, holding several positions within Cargill Animal Nutrition.

Tania graduated from Harding University, Searcy Arkansas, with a B.B.A. in business administration and international business and an MBA from INCAE Business School. Prior to Cargill her experience was mainly in CPG companies such as SAB Miller, The Coca Cola Company, and Dole Foods. She has always been known for her leadership, passion, and building high performing teams. Tania has a passion for Latin America and its potential and is involved in several volunteer organizations such as CEPUDO, an NGO that represents Food for the Poor in Honduras. She is married to Xavier, and they have two children, Xara, 11 and Xantiago, 4.