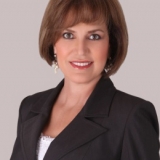 Susana Pinilla Cisneros is currently the representative of CAF - Development Bank of Latin America in Panama. She is a specialist in development issues, including: employment, inclusion, interculturality, competitiveness, and governability. Pinilla Cisneros was a minister of state for the Ministry of Labor and the Promotion of Employment and the Ministry of Women and Social Development within the government of Peru. She was the advisor to the president of the republic of Peru and a member of the board of directors of the Peruvian Corporation of Commercial Airports and Aviation, Inc. (Corpac). Pinilla Cisneros is founder and CEO of IDESI, a pioneering institution of financial and productive inclusion, and recognized by the Inter-American Development Bank (IDB) as a leader in microfinance in Peru. She was also founder and president of the board of directors of ProEmpresa, a regulated financial entity in Peru focused primarily on micro-enterprise clients in exurban and rural areas. Pinilla Cisneros is an international consultant with experience in Latin America, Africa, and Asia. She has mastery of six languages: English, French, Spanish, Italian, Portuguese, and Quechua. Pinilla Cisneros is a professor at the University of Applied Sciences (UPC) and the Institute of Government of the University of San Martín de Porres. She has a BA in anthropology of development with studies in finance and business administration and a master’s in public policy and governability.