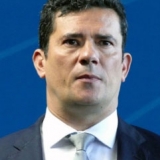 Sérgio Fernando Moro is a former magistrate, writer, university professor and current Minister of Justice and Public Security of Brazil. He was federal judge of the 13th Federal Criminal Court of Curitiba and professor of criminal procedural law at the Federal University of Paraná (UFPR). He's a specialist in the fight against financial crimes, money laundering and criminal organization. In 22 years in the career of the federal magistrate, he served at Lava Jato, at Banestado case and was an instructor judge at the Federal Supreme Court in 2012. He studied the Program of Instruction for Lawyers at Harvard Law School in 1998. He is an author and was a professor at the University of Paraná and Curitiba University Center and, in 2018, received the title of Doctor of Laws, honoris causa, from the University of Notre Dame du Lac, South Bend, Indiana. He’s a Law graduate from the State University of Maringá and Master and PhD from the Federal University of Paraná.