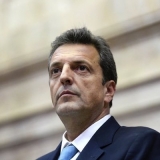 Sergio Massa is the current minister of the economy of Argentina. Previously, he was the president of the national Chamber of Deputies. Before that, Massa was a national deputy representing the province of Buenos Aires from the Frente Renovador party in the Argentine Chamber of Deputies. Before serving in Congress, he was the mayor of Tigre in the Buenos Aires province until 2013. Massa was first elected mayor in October 2007 before taking a leave of absence in July 2008 to serve as chief of staff to then-President Cristina Fernández de Kirchner. Prior to that position, he was a state representative for the province of Buenos Aires and the executive director of the National Administration of Social Security (ANSES). Massa has a law degree from the Universidad de Belgrano.