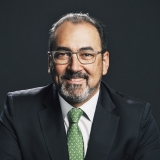 Sergio Díaz-Granados, the executive president of CAF—Development Bank of Latin America—is a lawyer specializing in government and finance from Colombia’s Externado University, with postgraduate studies in Public Management for Social Development from INAP (Spain). He studied constitutional law at the University of Salamanca (Spain). He boasts a long career in the public and private service, both nationally and internationally, with a special emphasis on development and regional integration issues.

In Colombia, he has held the positions of minister of Commerce, Industry and Tourism, Vice Minister of Business Development and President of the Boards of Directors of Bancoldex and ProColombia. He has also served as congressman and chairman of the Economic Affairs Committee of the House of Representatives.

Before joining CAF, he served between 2015 and August 2021 as executive director for Colombia and Peru in the IDB Group, which is composed of the Inter-American Development Bank (IDB), IDB Invest and IDB Lab. He served as dean and chair of the coordinating committee of the Executive Board. He was involved in the merger process of the Inter-American Investment Corporation in 2015. He also supported the approval of the second replenishment of the Multilateral Investment Fund (IDB LAB). As Executive Director, he chaired the IDB’s Policy and Evaluation Committee from 2016 to 2017, and the Inter-American Investment Corporation (IIC/IDB) Invest Board Committee from 2018 to 2019.

During his tenure as Colombia’s minister of commerce, industry and tourism between 2010 and 2013, he sat at CAF’s board of directors, helping strengthen the Latin American approach of the institution, as well as its important role in promoting sustainable development and regional integration. He led the negotiations of the framework and trade agreements that led to the creation of the Pacific Alliance and the entry into force of trade agreements with the United States and the European Union. He also engaged in trade negotiations with South Korea, Israel, Costa Rica, and Panama and began negotiations with Japan.

As deputy minister of business development between 2006 and 2008, he was involved in the creation of the Banca de las Oportunidades program, an instrument of financial inclusion, as well as in reforms to improve the business environment in Colombia. Diaz-Granados also served as advisor to the minister of finance and public credit. He was a congressman and chairman of the Congressional Committee on Economic Affairs. He served as president of the Association of Travel and Tourism Agencies, the largest association in the tourism sector. He has been chairperson of the Boards of Directors of Bancóldex, ProColombia, the National Guarantee Fund, the National Tourism Fund (FONTUR) and “Marca País.” In the academic field, he has lectured at the Sergio Arboleda University in Colombia.