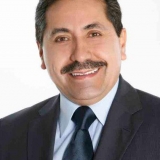 Rubén Camarillo has been national congressman since 2012. He is secretary of the Energy and Jurisdictional commissions, and member of the Rules, Regulations and Parliamentary Practices commission. From 2006 to 2012, Congressman Camarillo was Senator for the State of Aguascalientes, where he headed the Commission of Foreign Affairs and was vice coordinator of the National Action Party (PAN) in the Senate. He was also local congressman in the state of Aguascalientes, where he coordinated PAN Congressmen and presided the Commission of Interior. In the private sector he has been vice-president of the Mexican Institute of Chemical Engineers and member of the Employees Confederation of Mexico (COPARMEX). Congressman Camarillo is Chemical Engineer for the Aguascalientes Institute of Technology and received his J.D. law degree from Centro de Estudios Superiores del Estado de Aguascalientes.