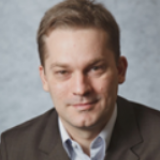 Rodrigo Santos is president of Monsanto Brazil. Prior to his current position, he was vice president of Commercial after leading the Product Management and Technology Development teams. In 2007, Mr. Santos was appointed commercial lead for Romania and Bulgaria in EMEA organization. Throughout his career, he has served in a variety of roles across sales, marketing and strategy positions mainly focused on seed and trait business. Mr. Santos has been a manager since 2000 and has led multifunctional teams with the Crop Team and Steering Team. He joined Monsanto in 1999 as marketing manager. Mr. Santos received a bachelor’s degree in engineering from Universidade de São Paulo before completing the Latin America Leadership Program at IAE as well as an MBA from Fundação Getúlio Vargas/Ohio University.