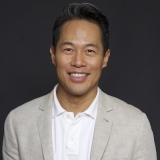 Richard Lui is a journalist and news anchor for MSNBC and NBC News, with more than 30 years’ experience in television, film, technology, and business. Lui joined MSNBC in 2010, where he anchors Early Today for NBC News and covers sports for both NBC News and MSNBC morning shows. Previously, he worked at CNN Worldwide, where he became the first Asian American man to anchor a daily, national cable news show. At CNN, Lui received Peabody and Emmy awards for his team reporting at CNN during Hurricane Katrina and the Gulf Oil Spill. His career also involves a fintech patent and launching six tech brands over three business cycles. Lui has a Bachelor’s degree from University of California, Berkeley, and an MBA from the University of Michigan. He is a member of the Asian American Journalists Association.