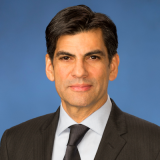 Ricardo Mora is co-head of Latin America and Head of Americas Global Currencies and Emerging Markets Sales at Goldman Sachs. He joined Goldman Sachs as a managing director in 2008 and was named partner in 2010. Prior to joining the firm, Mora was a managing director at Deutsche Bank, where he held senior roles in emerging markets sales, trading, and syndicate from 1995 to 2008. Before joining Deutsche Bank, he worked in emerging market sales at Chemical Bank from 1991 to 1995. He has a Bachelor’s degree in economics and sociology from the University of California, Berkeley, and a Master’s degree in international affairs from Columbia University. Mora is a member of the Global Markets Division Operating Committee, the Client Business Standards Committee and serves on the Americas Inclusion and Diversity Committee. He is on the Board of Visitors for the University of California, Berkeley.