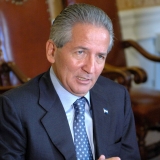 Ricardo Maduro is a former president of Honduras from 2002 to 2006 representing the National Party of Honduras (PNH). He was president of the Central Bank of Honduras and coordinator of the Economic Cabinet. He was elected as congressman to the Central American Parliament and participated as candidate for a seat in the National Congress of Honduras. Born on April 20, 1946, he achieved his degree in economics from Stanford University, California, in 1969. He has extensive business experience, which begins as general manager of Xerox in Honduras. Since 1976, he has been the executive director of Inversiones La Paz, an investment holding company, where he has created, organized and promoted, both individually and collectively, businesses in different fields, such as shrimp farming, retail electronics, car dealerships, banks, supermarkets, shopping malls and hotels.