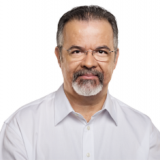 Raul Jungmann served as Brazil’s defense and public security minister from 2016 to 2018. A founding member of Brazil’s Popular Socialist Party, he is presently vice chairman of the Pernambuco state division and a member of the party’s national secretariat. Jungmann previously served two terms in the Brazilian House of Representatives from 2003 to 2010, where he chaired the Commission on Public Security and the Congressional Front for Arms Control. He also served as minister of agricultural development between 1999 and 2002 and chaired the National Agrarian Reform Institute from 1996 to 1999 and the National Institute for the Environment (IBAMA) between 1995 and 1996. Jungmann has served as the secretary of planning for the state of Pernambuco, as well as the executive secretary of the national Planning Ministry. He studied psychology at the Catholic University of Pernambuco.