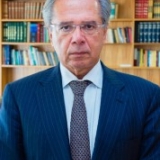 Paulo Guedes is the Brazilian minister of economy. He is also the founder of Banco Pactual, Abril Educação, Faculdades Ibmec, and Instituto Millenium. Guedes was also a board member of several large companies. He was a columnist for Folha de S. Paulo and O Globo newspapers as well as Exame and Época magazines. He was also a professor at PUC-RJ, Fundação Getúlio Vargas (FGV), and the National Institute for Pure and Applied Mathematics (IMPA). Guedes has a PhD in Economy from the University of Chicago.