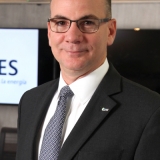 Miguel Bolinaga is the president of AES businesses in Panama (AES Panamá, AES Changuinola, and more recently Gas Natural Atlántico and Costa Norte LNG Terminal). Before his arrival to Panama, he served as commercial corporate director and later as vice president of Electric Market and External Relations for AES in El Salvador, where the company holds an 80 percent market share in electricity distribution services through four distributing companies, serving more than one million end customers. From 2002 to 2007, he served in La Electricidad de Caracas in Venezuela, a former AES subsidiary, which provides energy services in the city of Caracas, to more than 1.2 million end customers. Bolinaga joined EDC as customer services director, where he managed 25 commercial offices with more than 300 payment facilities, online banking, and an in-house call centers with more than 80 stations and 300,000 monthly calls. Later he held the post of commercial director, where he developed, implemented, and followed through with commercial policies related to billing, printing, notification, and collection for more than one million clients, and led the creation of the infrastructure for obtaining ISO 9001 certification for these processes. Before entering the electricity business, Bolinaga was part of the Venezuelan Armed Forces, holding several ranks and earned his bachelor’s degree in administration and logistics from the Venezuelan Naval School. He also holds a degree in computer engineering from the Venezuelan Armed Forces Higher Learning Institute, a master’s degree in information systems development from Simon Bolivar University, a graduate degree in customer experience from the El Salvador Higher Institute of Economics and Business Administration, and a certificate in business finance from FEPADE, in El Salvador.