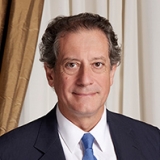 Miguel Ángel Pesce is the president of the Central Bank of Argentina. He holds an undergraduate degree in economics from the School of Economic Sciences, Universidad de Buenos Aires (1981–1987). He was president of Banco de la Provincia de Tierra del Fuego (2015–2019), director in YPF SA (2019), and deputy governor of the BCRA (2004–2015). He also chaired the Fondo Fiduciario para la Reconstrucción de Empresas (Trust Fund for Reconstruction of Companies), was representative of the ministry of economy and production at the BCRA (2003–2004), minister of economy in Santiago del Estero during the federal intervention, and trustee for the nation (2004). He served as secretary of the treasury and finance (2001–2003) and under secretary of financial management and administration in the City of Buenos Aires (1998–2001). He was advisor to the committees on finance and on budget and treasury in the Argentine Chamber of Deputies (1984–1989).