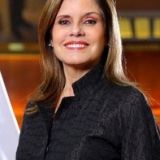 Mercedes Aráoz Fernández was named prime minister of Peru in September 2017. Previously, she was second vice president and congresswoman since July 2016. Aráoz Fernandez has also served as country representative for the Inter-American Development Bank in Mexico and as the first female finance minister of Peru from 2009 to 2010. She served as minister of foreign trade and tourism from 2006 to 2009, and also as Peru’s production minister during 2009. Aráoz Fernandez has worked as a consultant with a variety of international organizations including the World Bank, the United Nations Conference on Trade and Development, the Organization of American States, and the CAF – Development Bank of Latin America. She has been a board member and professor at the Universidad del Pacífico in Lima and the Academia Diplomática del Perú. Aráoz Fernandez has a bachelor’s in economics from the Universidad del Pacífico and she earned her master’s and doctorate in economics from the University of Miami.