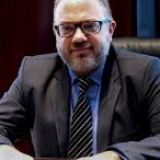 Matías Kulfas is the productive development minister of Argentina and a university professor. Previously, he has served as the general manager of Argentina’s Central Bank from 2012 to 2013, director of Argentina’s Banco de la Nación from 2008 to 2010, and was undersecretary for Small and Mid-size Enterprises and Regional Development from 2006 to 2007. Kulfas holds a degree in economics, a master’s degree in economic policy, and his PhD in social science, all from the University of Buenos Aires.