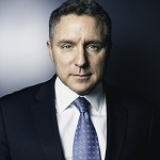 Mark Califano is the chief legal officer and regional managing director of the Americas at Nardello & Co., where he conducts investigations for litigation, corruption, trademark, gray market, fraud, due diligence, and shareholder activist matters. Califano previously served as senior vice president and managing counsel for global litigation and government investigations at American Express and as head of litigation and legal policy at GE Capital. Prior to joining GE, he built and led Paul Volcker’s investigations team on the Independent Inquiry Committee into the UN Oil-for-Food Program. Previously, Califano worked as an assistant U.S. attorney in Connecticut from 1992 to 2006, where he established and led a cyber/intellectual property prosecution team that pursued cybercrime, financial fraud, and terrorism investigations spanning over a dozen countries. He holds a JD from Duke University School of Law and a bachelor’s from Princeton University.