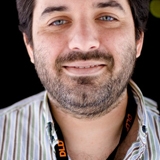 Mariano Amartino is director for Latin America at Wayra. He has over 12 years of experience working with internet companies and has a decade of experience as an entrepreneur, focusing on new media. In 2013, Amartino joined Wayra, Telefónica's global start-up accelerator, as the head of Latin America, where he manages a portfolio of more than 150 companies across seven countries. He is also a consultant, entrepreneur, and blogger at uberbin.net, one of the first Spanish language blogs, where he covers online communities, the internet, and new media topics. He also currently sits on the boards of several start-ups and is involved with Fon Argentina. Previously, Amartino worked at Hipertextual, where he was general manager, and later CEO of Hipertextual.com. Additionally, after creating and managing the first weblog written in Spanish in a traditional media company in 2002, Amartino founded Weblogs.com.ar and Blogdir.com, as well as the first consulting company focused on online communities and new media and Überbin I/A, a company that helps start-ups tap into the Spanish language market. All of the major media companies in Latin America are his clients. Recently, he became a partner at Hipertextual, the largest blogging network in Latin America.