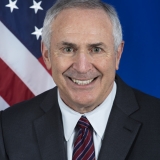 Marc R. Stanley was nominated by President Biden as Ambassador Extraordinary and Plenipotentiary of the United States of America before the Government of the Argentine Republic on August 6, 2021. Ambassador Stanley was unanimously confirmed by the United States Senate on December 18, 2021, and was accredited by the Government of the Argentine Republic on Monday, January 24, 2022. Before his service as a diplomat, Ambassador Stanley was a trial lawyer for 40 years, focusing primarily on national class actions and complex litigation. He was voted a “Best Lawyer in Dallas” and a “Super Lawyer” for the entire state of Texas for almost every year since the accolades were established.

Ambassador Stanley also spent most of his career as a political activist, Jewish community leader, and philanthropist. He previously served as President of the Texas Trial Lawyers Association and the Dallas Trial Lawyers Association. In public service roles, he served as Chairman of the Texas Public Finance Authority (appointed by Texas Governor Ann Richards), a Member of the Board of Visitors of the Air University of the United States Air Force (appointed by Secretary Bill Cohen), and a Council Member of the U.S. Holocaust Memorial Museum (appointed by President Barack Obama). He has also been a leader of Jewish charitable and political organizations, including six years as Chairman of the National Jewish Democratic Council and on the Executive Committee of the Israel Policy Forum. In addition, Ambassador Stanley served as Chairman of the Legacy Senior Communities, a Jewish-sponsored, not-for-profit charitable organization in Dallas, TX.

Ambassador Stanley worked on every presidential campaign since 1988 (in most cases serving on the finance councils) and helped form Blue Senate, a Dallas PAC that hosts most Senate candidates. He also served as Dallas County Chair for Senator Lloyd Bentsen’s campaign in 1988 and Governor Ann Richards’ campaign from 1989-1990. More recently, Ambassador Stanley served as Chairman of Lawyers for Biden (2019-20). Beginning as a college student, Ambassador Stanley worked in the U.S. Congress for three years, serving with Representative Dale E. Kildee (D-MI) and with the Committee on House Administration as an aide to Chairman Frank Thompson (D-NJ). In that role, he created the first Telephone Directory for the U.S. House of Representatives and was its Editor from 1977-1979.

Ambassador Stanley received his BBA (Accounting) from The George Washington University in 1979 and his J.D. from the University of Texas School of Law in 1982. He has been married to Wendy Hillebrand Stanley for almost 40 years and they have three grown children and one grandchild. He enjoys hiking and skiing. A strong proponent of organ donation, he donated his kidney to an ill Dallas rabbi in 2014.