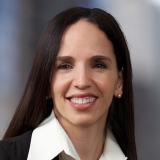 Luisa Palacios is a senior research scholar at the Center on Global Energy Policy. She came to the center after a multidisciplinary career in the intersection of energy, finance, and policy.

In March 2021, she completed a two-year period in the Board of Directors of Houston-based Citgo Petroleum Corporation, the fifth-largest independent U.S. refiner during most of which she served as chairwoman. She and her Board colleagues led the company during a critical period in its history, as it faced significant geopolitical, financial, operational, and legal challenges. As Citgo’s first-ever chairwoman, Palacios also shaped efforts to strengthen corporate governance, ethics, and social responsibility, including the publication of the company’s first-ever ESG report.

Before her time at Citgo, Palacios was a senior managing director and member of the management committee of Medley Global Advisors, a macro-policy research firm. She headed Medley’s Latin America and later the firm’s emerging market research efforts. She previously worked at Barclays Capital as a director in the emerging markets research department, and as an economist in the risk department at Société Générale in Paris. She also worked as a senior economist at the Japan Bank for International Cooperation and was a consultant in the Office of the Chief Economist for Latin America at the World Bank.