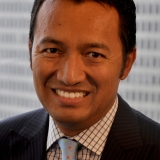 Luis Oganes is the head of currencies, commodities, and emerging markets research at J.P. Morgan, where he joined in 1997 in New York. He manages the teams of researchers that analyze fundamental and technical drivers for global currencies and commodities, as well as the economists and strategists that analyze macro dynamics of emerging market economies to identify investment opportunities in fixed income and currency markets in Emerging Asia, Eastern Europe, Middle East, Africa, and Latin America. Oganes started in the Latin America research team and relocated to London in 2014 after taking over the management of the emerging markets research team globally. He relocated back to New York in 2016 and in 2017 expanded his responsibilities to also manage the G10 FX and Commodities Research teams. In the spring of 2019, Oganes returned to London as its more central time zone facilitates the management of three global teams. He has participated in several advisory projects with governments and quasi-sovereign entities in Latin America, the Middle East, and Asia. In 2017, Oganes became the co-chair of the Hispanic Leadership Forum of J.P. Morgan’s Corporate and Investment Bank, which looks to attract, retain, and promote talent of Hispanic background. Outside of J.P. Morgan, he is a member of the advisory board of the Graduate School of Arts and Sciences of New York University, and a founding member of Help Peru, a non-profit organization that raises funds in the United States to support charities and philanthropic causes in his native Peru. Oganes obtained his PhD in economics from New York University and his BA in economics from Universidad de Lima.