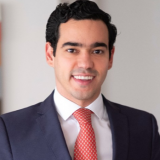 Luis Alberto Rodríguez is the director of the National Planning Department (DNP). He previously served as vice minister of finance, where he led the technical work behind the 2018 Financing Law and the 2019 Medium-Term Fiscal Framework. Additionally, he led the creation of the Capital Market Mission, the first temporary commission of its type in 24 years, which recently delivered its recommendations to the national government. Rodríguez also served as Head of Economic Studies of the Banking Association and Financial Institutions of Colombia (Asobancaria), economic advisor at the United Nations Development Program (UNDP), and consultant at the Ministry of Labor and the Inter-American Development Bank (IDB). Rodríguez is an economist from the Universidad Nacional, with a master's degree in Economic Policy from Columbia University (United States). He has been a teacher at the Universidad del Rosario and the Universidad Nacional de Colombia.