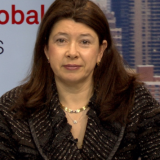 Lisa M. Schineller is a managing director in the Sovereign Ratings Department and Economist for Latin America at Standard & Poor’s. She is responsible for sovereign analysis in the Latin American Group and is the primary analyst for Mexico and other credits in the region. In her role as Economist, she formulates S&P’s economic forecasts and publications for the Latin America region. Schineller was also an Adjunct Associate Professor at Columbia University’s School of International and Public Affairs from 2006 to 2009. She co-developed and co-taught a course entitled “Problems of Economic Growth in Latin America” for Master’s Degree students. Before joining Standard & Poor’s in August 1999, Schineller worked in the International Finance Division at the Federal Reserve Board of Governors in Washington DC for over 3 years as the French desk economist and world oil economist.  She was also an economist at Exxon Company International, Corporate Affairs. At Exxon, she analyzed and projected economic and energy developments in Latin America (mainly Brazil) and Europe. Schineller holds a Ph.D. in economics from Yale University and a B.A. in economics and Spanish from Wellesley College.  Upon completion of her Ph.D., she was an assistant professor at McGill University, Faculty of Management from 1992 to 1994.