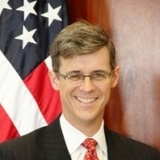 Kevin Michael O’Reilly became deputy assistant secretary of state for Western hemisphere affairs after having served as director of the Office of Brazil and Southern Cone Affairs. He previously served as Deputy Chief of Mission at the U.S. Embassy in Panama City, Panama, from July 2014 to July 2017, and as the embassy’s chargé d’affaires from June 2015 to February 2016.

A career member of the United States Senior Foreign Service, O’Reilly has held other senior-level positions, including director of the Office of Mexican Affairs and senior director for International Narcotics and Law Enforcement Affairs at the United States Embassy in Baghdad, Iraq.

As director for Mexican affairs, he helped develop and implement the U.S.-Mexico High Level Economic Dialogue, an initiative to promote economic growth and job creation, as well as the U.S.-Mexico Bilateral forum on higher education, innovation, and research to expand educational and economic opportunities for citizens of both countries. He served in Baghdad from 2011 to 2012, during the period in which U.S. military forces left Iraq, participating in an effort to help Iraq train its law enforcement personnel.

O’Reilly served as the White House’s national security council director for North American affairs from 2009 to 2011. While there, he helped develop the U.S.-Canada Beyond the Border partnership, an effort to improve public security and economic competitiveness.

From 2007 to 2008, he served as director for Latin American affairs in the Department of Homeland Security’s office of international affairs. He has also served as a Pearson fellow in the office of Senator Richard J. Durbin of Illinois; and in the Pentagon as an action officer in the Western Europe and North Atlantic Treaty Organization (NATO) Division, Strategic Policy and Plans (J-5), of the Joint Staff.

During his career as a foreign service officer, O’Reilly has served abroad at U.S. embassies in Mexico City, Mexico; Santo Domingo, Dominican Republic; Buenos Aires, Argentina; and Jakarta, Indonesia. He was born in Evanston, Illinois and holds Masters of Arts degrees from the U.S. Naval War College and the Johns Hopkins University School of advanced international studies. He received his bachelor of arts degree in history and a Juris Doctor degree from Loyola University Chicago.