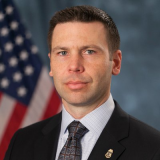 Kevin K. McAleenan was designated as the acting secretary of Homeland Security by President Trump on April 8, 2019. Before this appointment, he served as commissioner of U.S. Customs and Border Protection (CBP), having been confirmed by the U.S. Senate in March 2018. Previously, he had served as CBP acting commissioner since January 2017.

As CBP’s chief executive, McAleenan oversaw 60,000 employees, managed a budget of over $13 billion, and ensured the effective operations of CBP’s mission to protect national security while promoting economic prosperity. He directed CBP’s three core missions of counterterrorism, border security, and trade enforcement while facilitating $4 trillion in trade and facilitating travel of over 365 million people through ports of entry. Previously, McAleenan served as deputy commissioner from November 2014, until his appointment to Acting Commissioner. In this role, he served as the agency’s chief operating officer and senior career official.

Under McAleenan’s leadership, CBP developed strategies that protect the nation’s borders from terrorism and transnational criminal networks. During his tenure, CBP implemented innovations that have facilitated the U.S. international arrival and departure process, saving the government and travel industry millions of dollars. Additionally, under his leadership CBP developed a trade transformation agenda, designed to help America compete in the global economy.

From 2006 to 2008, McAleenan served as the area port director of Los Angeles International Airport, directing CBP’s border security operations at the Los Angeles airport and 17 other airport facilities in one of CBP’s largest field commands. In December 2011, he was named acting assistant commissioner of CBP’s Office of Field Operations. In this position, McAleenan led agency operations to secure the U.S. border while expediting lawful trade and travel at 329 ports of entry in the United States and 70 international locations in more than 40 countries.

McAleenan received a 2015 Presidential Rank Award—the nation’s highest civil service award. In 2005, he received the Service to America Medal, Call to Service Award, for spearheading efforts to develop and implement a comprehensive antiterrorism strategy in the border security context after Sept. 11, 2001.

McAleenan has been a member of the U.S. Government’s Senior Executive Service since 2006. Before his government service, he practiced law in California. He received his juris doctor degree from the University of Chicago Law School and a bachelor of arts degree from Amherst College.