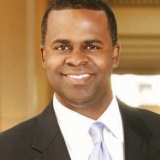 Hon. Kasim Reed is the 59th Mayor of the City of Atlanta. As mayor, he has significantly reduced crime and improved core services while initiating reforms that have led to four years of balanced budgets and growth for Atlanta. Additionally, Mayor Reed is chairman of the Transportation and Communications Committee of the U.S. Conference of Mayors. Prior to his election, he served as a member of the Georgia General Assembly for 11 years. He earned his Juris Doctor and Bachelor of Arts degrees from Howard University.