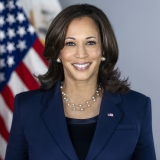 Kamala D. Harris is the vice president of the United States. She was elected vice president after a lifetime of public service, having served as district attorney of San Francisco, California attorney general, and U.S. senator. Vice President Harris was born in Oakland, California, to parents who emigrated from India and Jamaica. She is a graduate of Howard University and the University of California, Hastings College of Law. She is the first woman, the first Black American, and the first South Asian American to be elected vice president, as was the case with other offices she has held. She is, however, determined not to be the last.