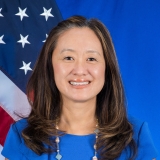 Chung became the principal deputy assistant secretary in WHA in November 2018. She was previously the director for Japan in the Bureau of East Asian and Pacific Affairs and the acting deputy assistant secretary from February–September 2018. A career member of the Senior Foreign Service, class of minister-counselor, she held positions as the deputy chief of mission in Cambodia and economic counselor in Thailand.

Chung served as the deputy political counselor in Bogotá, where she managed the U.S. government’s largest extradition program, including paramilitary and narco-trafficking cases. As the United States representative to the G24 in Bogotá, Chung led initiatives focused on demining, labor, and human rights. In Baghdad, she served as chief of staff coordinating civilian-military foreign assistance with thirteen agencies and sections, and managed the interagency Emergency Assistance Coordination Team in response to suicide bombings. While working in the Office of Korean Affairs in Washington, she frequently traveled to the DPRK to implement the U.S.-North Korea Agreed Framework. She also served in Guangzhou, Tokyo, and Hanoi as a public diplomacy officer and APEC coordinator.

Chung is from Huntington Beach, California, and joined the Foreign Service in 1996 as the first cohort of the Thomas R. Pickering Fellowship program. She received a B.A. in political science from the University of California San Diego and an M.A. in international affairs from Columbia University. Her foreign languages include Korean, Japanese, Spanish, and Khmer.