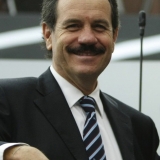 Juan Bueno Torio has been national congressman since 2012. He is secretary of the Energy commission and member of the Finance and Monopolistic Practices and Market Regulation Monitoring commissions. In 2006, he was elected Senator for the State of Veracruz. Congressman Bueno Torio was CEO of PEMEX Refinación, a subsidiary of PEMEX from 2003 to 2006. From 2000 to 2003 he was under-secretary of Small and Medium Enterprises at the Secretariat of Economy. In 1997, he was elected congressman for a three-year term, where he headed the Commission of Patrimony and Industrial Development. Congressman Bueno Torio received his J.D. law degree from Universidad Nacional Autónoma de México.