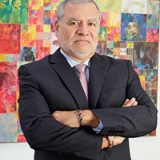 José Ugaz is a Peruvian jurist and partner at Benites, Vargas & Ugaz in Lima. Prior to this, he served as chair of the board of Transparency International from 2014 to 2017. Ugaz is the author of the 2014 book Caiga quien caiga. He was elected to the Transparency International Board in 2011, having previously served as an individual member in 2008 and president of Proética, Transparency International’s national chapter in Peru, in 2002. Ugaz was a member of the UN Peace Keeping Mission and the UN Election Observers Mission for El Salvador, and from 2004 to 2006 served at the World Bank’s Institutional Integrity Office, the bank's anti-corruption unit. A lawyer by training, he served as ad-hoc state attorney of Peru in several corruption cases. During the Fujimori-Montesinos affair from 2000 to 2002, Ugaz’s office opened more than 200 cases against 1,500 members of the Fujimori network. He studied law at the Pontificia Universidad Católica del Perú.