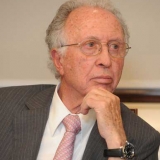 President, Chamber of Commerce and Services of Argentina

Jorge Luis Di Fiori is president of the Chamber of Commerce and Services of Argentina (CAC). He is also a consultant member of the Argentine Council for International Relations (CARI) and vice president of the Ibero-American Association of Chambers of Commerce (AICO) for the Southern Cone. In 2008 he was named regional secretary of AICO. In 2001 he was part of the Consulting Commission of Strategies for the Promotion of Foreign Trade by the Ministry of Foreign Affairs, International Commerce, and Cult. In 1989 he was professor of customs law in the Universidad Nacional de Córdoba. From 1984 through 1985, Mr. Di Fiori served as consultant for the Latin American Integration Association (ALADI) to promote trade flows and market trends in the ALADI member countries. In 1978 he was designated consultant in matters of customs and international commerce for the newspaper La Prensa. In 1970 he became a founding member and president of the Argentine Institute of Customs Law Studies. Mr. Di Fiori is member of the Institute of Maritime Studies and the Academic Council of the American Institute of Economic, Legal, and Social Research. He is also a leading member of the Consulting Council of Customs in representation of the Argentine Chamber of Commerce. In 1967 he earned his law degree from the University of Buenos Aires (UBA) and in 1970 his doctorate from the UBA in finance and economics.