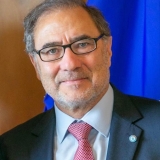 Argentine Ambassador to the United States

Ambassador Jorge Argüello assumed the position of Ambassador of Argentina to the United States on February 6, 2020, and is a lawyer and politician. Argüello began his political career in 1987 as a member, then chairman, of the City Council of Buenos Aires. He served twice as a national congressman; the first time during Carlos Menem´s presidency in 1991 and then during Nestor Kirchner´s presidency in 2003. Argüello has a wide-ranging experience in the public sector; as a member of Congress he was appointed Chairman of the Foreign Affairs Committee and Chairman of the Parliamentary Observatory for the Malvinas Question. In 2018 he became Secretary of State, in the Official Representation for the Malvinas Question in Tierra del Fuego province, Antarctica and South Atlantic Islands. Argüello has worked extensively in the diplomatic field; as Permanent Representative of Argentina to the U.N. (2007-2011), Ambassador of Argentina to the United States of America (2011-2012), and Ambassador of Argentina to Portugal and Cabo Verde (2013-2015). He later set up his own Foundation, Embajada Abierta, a center for international affairs and public policy. He is a member of the Advisory Board of the Argentine Council for International Relations (CARI). Ambassador Argüello was a member of the Advisory Board of the Center for Latin American Studies (CLAS) at the School of Foreign Services, Georgetown University, and a Research Associate of the Centro de Estudos Internacionais (CEI) at the Portugal ISCTE-IUL University. He also served as Director of the Government and International Relations studies program at the Universidad Argentina de la Empresa (UADE). He was appointed Ambassador to the United States of America by President Alberto Fernandez in early 2020. He is married to Erika Grinberg and has four children.