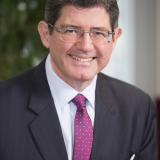 Joaquim Levy is the director for economic strategy and market relations at Banco Safra S.A. He has been president of the Brazilian Development Bank (BNDES), managing director and CFO of the World Bank Group, and minister of finance of Brazil. Levy formerly served as chief strategist and CEO of Bradesco Asset Management and as vice president for finance and administration at the Inter-American Development Bank (IADB). He has also held a number of positions in Brazil’s federal and state-level administrations, notably as secretary of the national treasury of Brazil, as well as assignments at the IMF and the ECB. Levy is a member of the World Resource Institute's board of directors and of The Nature Conservancy's Latin America Conservation Council. He was an academic fellow at Stanford University's Steyer-Taylor Center in 2020, researching Brazil's paths towards becoming a net zero economy. Levy originally trained as a naval architect, and holds a PhD in economics from the University of Chicago.