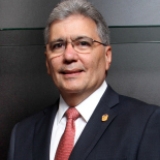 Irvin A. Halman is the current general administrator of AIG. He serves on the board of the National Council for Government Innovation as secretary, is president of the Advisory Board for Universal Service and Access, a member of the Competitiveness Council of the Government of Panama, vice president of the Board of Directors of the public interest association for Infoplazas, and participates in the Board of Trustees of the National Competitiveness Center public-private sector partnership. Halman began his career in the Photographic Technology Division at Eastman Kodak Co. in Rochester, NY, followed by product development and marketing at the Motion Picture & Audiovisual Markets Division, and later in management positions in Industria Nacional de Artefactos, S.A., Leasing Panama, Kodak Panama and Kodak Export, Ltd. He was the Latin America business manager for the Clinical Diagnostics Division of Eastman Kodak Co. and Johnson & Johnson, managing director at DIASA and commercial director at ELGA. Halman is the former president of the Chamber of Commerce, Industries and Agriculture of Panama, former president of the Institute of Corporate Governance of Panama and director of Empresas Aliadas, S.A. He also served as president of the Board of the Consejo del Sector Privado para la Asistencia Educacional (CoSPAE) and is currently a member of its board of trustees. Halman is a former member of the board of the Secretaría Nacional de Ciencia, Tecnología e Innovación (SENACYT) and participated in the Board of Trustees of the Centro Nacional de Competitividad representing the Chamber of Commerce, Industries and Agriculture of Panama. He is a member of the Institute of Corporate Governance Panama, Panama ConSoc IDB Committee, Chess Committee for Social Action of the International Chess Federation (FIDE), think tank of the University of Panama and the Fundación Panameña de Ética y Civismo. Halman actively participated in other non-profit organizations such as Rotary Club Panama Sur, Rotary Foundation of Panama, and was founder and director of the Global Compact Network. He is a Board member of Fundación Unidos por la Educación, participated in the Dialogue for the Integral Transformation of the Educational System of Panama, is on the education task force of the Concertación Nacional para el Desarrollo and the Fundación para el Desarrollo Social de Panama (FUDESPA). Halman was also a member of the working group on decentralization and school autonomy of PREAL. As coordinator of the Executives for Educational Excellence program of CoSPAE, he was invited to participate as an advisor to the Quality Schools Commission of the Ministry of Education. Halman obtained a bachelor's degree in engineering from the Worcester Polytechnic Institute and an MBA at the University of Rochester, and participated in the Kellogg School of Management Advanced Management Program at Northwestern University in Chicago.