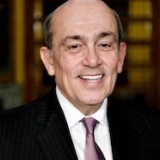 Ambassador of Peru to the United States

Hugo de Zela is a career diplomat with 42 years of service. He has served as permanent representative to the Organization of American States (OAS), Peru's ambassador to Brazil and Argentina, Peru's national coordinator in the Rio Group, as well as a member of Peru's delegation in border negotiations with Ecuador from 1997-1998. He has also served as chief of staff of the General Secretariat of the Organization of American States on two occasions, from 1989 to 1994 and 2011 to 2015. From April 5, 2018, to April 21, 2019, he served as Vice Minister of Foreign Affairs. Since April 22, 2019, he is Ambassador of Peru to the United States and Coordinator of the Lima Group. He has a degree in international relations from the Diplomatic Academy of Peru. He has studies in economic and administrative sciences at the Universidad de la República Oriental del Uruguay, as well as doctorate studies in political sciences at the Universidad del Salvador in Argentina.